Dragonshards blight their surroundings, emitting a warping and destructive energy that prompts strange growths in living things and can even taint the land itself. 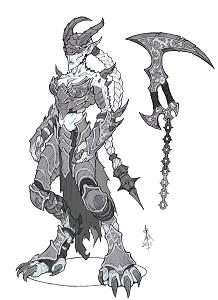 Player characters have Dragonblight scores to reflect the danger of being exposed to Dragonshards. The more exposure a character faces, the greater the mutation upon its body, until it is unrecognizable and becomes a voracious killing machine.

Most characters begin with Dragonblight 0.

Your Dragonblight score might increase during the game, usually as a result of using a Dragonshard in a reckless manner, as determined by the GM or the rules. Examples include:

As your Dragonblight score increases, you suffer increasingly unpleasant effects.

In addition, whenever you gain Dragonblight, roll a d20. If the number rolled is less than your new Dragonblight score, you gain a purely cosmetic mutation that makes you take on Draconic characteristics, and roll a d20 again and consult the Dragonblight Mutations table. If you would gain a mutation you already have, you instead gain a Trauma.